Hairspray and other Revolutionary Texts

How are we almost through January? It seems bizarre that 2017 exists at all. We are all excited here to celebrate my son’s 1st birthday at the end of February, so we’re trying to stay focused on that and other positive things. STAY POSITIVE Y’ALL. Protect yourself. Don’t gorge on awful news and retreat. We need you. ❤

I wish I could take my own advice–man, have I been up and down lately. I get manic bursts of energy (WE MUST RESIST!!! FIGHT THE POWER!!! CALL MY SENATOR!!! TAKE TO THE STREETS!) and then I feel awful, like the world is not safe for my son. It’s hard, y’all. I know you know it’s hard.

I take heart in the HEROES that are all around us. Like the National Park rangers who have gone rogue, tweeted climate change facts in defiance of a Presidential gag order, and inspired so many other agencies to do the same. Good job, park rangers. You are amazing and inspiring!!

I take enormous amounts of heart in all of the super lawyers who dropped everything and ran to airports to help those detained. My friends Kayleen Hartman, Cindy Heidelberg, Bill Murray, and Chas Carey were among them and they are all rockstars. I feel truly lucky to know so many awesome lawyers. We get a bad rap–but when things get rough, we are there with legal pads and big words to FIGHT FIGHT FIGHT. I think my feelings are best summed up by a meme created by my friend JR (another super lawyer): 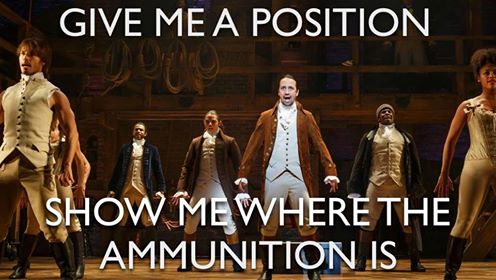 Have y’all signed up for It Starts Today yet? It is a super-positive, forward-thinking effort for the Dems to take back seats in 2018. I’ve thought long and hard about it, and this seems like the thing to throw my weight behind. Removing Trump will be difficult. Pence would arguably be worse. If we can’t have the presidency back until 2020, we can at least make it harder for the president to do things while he is in office.

I’ve heard a lot of people say “but my contribution isn’t enough, it’s so little, it won’t matter.” I know the feeling! But the ACLU has raised $24 MILLION dollars since Saturday. A lot of people donating little bits can make a huge difference. The plan is simple–It Starts Today asks for just $4.68 a month (the number of seats up for grabs), which it will divide between all of the Democrats running in 2018. That’s it. Pour money into every Democrat’s campaign to stop Trump’s agenda. If you did it right now, your total contribution would be less than 100 bucks. One time in law school, a group of friends and I talked about pooling our money to buy a pirate ship that was listed on craigslist. None of us had enough on our own, but together we could do it. This is like that idea, but way better. (We did not buy the pirate ship. I regret that. But you will not regret signing up to donate for It Starts Today!!)

Y’all didn’t come here just for politics talk, I know, so let’s talk HAIRSPRAY. Since I have a small child, I didn’t get a chance to watch Hairspray, Live! until this week. And boy, have I got a lot to say! I’ll do it bullet point style, like my Harry Potter series thoughts.

It wasn’t perfect. It didn’t really bring anything new to the show. But it made me cry and it made me smile during a time I really needed both. So bravo, cast of Hairspray Live! Thanks for making art.

I’ve prattled on for far too long. Thanks for reading! Take care of each other. Take care of yourselves. Check next week–should have the book tour finalized by then!

It’s time to dust off the cobwebs and get back to work! Lots of stuff happening around here (part of the reason I’ve been blog-less for so long)–here are some highlights:

So that’s the good news. Now, let’s address the orange elephant in the room. Man oh man, are things bad out there! As a relentless optimist, I had been of the opinion that he couldn’t possibly be able to enforce most of the things he said, that he won’t be as bad as he said he’d be. (Not that I doubted his badness, I just hoped that it wasn’t as bad as I feared.) It seems like it is, in fact, as bad as we all feared. I don’t want or need to dwell on just how bad it is. If you’re reading this, you probably know. So let’s accept that this nightmare is real, and then link arms and move forward. Fear not! It’s time for action!!

I read an article that said something like “everyone go run for office. It’s now demonstrably true that you need no qualifications in order to do so.” So, let’s seize this upside down world and do some good. *

The internet has been positively flooded with lists of things that you can do. That is a good thing! I’ve also seen comments like “there’s too many choices where do I start I’m too afraid and paralyzed by indecision,” which is not good. So I offer two options that I am doing, to help you dip your toe in if you’re not sure what to do. This is just my opinion–you do you.

2. Calling my reps. It’s a pain. I get it. You wonder if it works. I know. I feel the same way. You’re talking to someone who orders pizza online because I hate talking to strangers on the phone. But I’ve set aside Thursdays during Teddy’s nap to make calls. When I see something gross during the week, I add it to a list on my phone. Then I call Sen. Kaine, Sen. Warner, and Rep. Goodlatte and tell them what’s on my list. I keep it short, clear, and tell them how I expect them to vote. Like, “Vote No on Devos. She doesn’t care about public education and is harmful to America’s children. Vote no.” It’s therapeutic, listing my grievances to someone who has to listen. It takes four minutes, tops. And it will work.

As my brilliant best friend said, “if a kid is home alone and knows that his parents will not be checking in on him, what motivation does he have to follow the rules?” We need to let Congress know, in no uncertain terms, that we are checking in. And we expect them to behave. I think that this is the most effective tool we have in our arsenal–annoy them with telephone calls. Make them hear you. If you want to do this but are scared, email me! I will talk you through what to expect. I will text you encouragement and then send you high-five emoji afterward. If you need help, ask me. You can do this. I know you can.

That’s what I’m doing once a week. You don’t have to do what I’m doing! It’s important to do SOMETHING, anything at all. Just fight back. Don’t stop fighting back. There are so many ways to get discouraged, to give up, to give in. I’ve felt a lot of them these past two weeks. People will always say you’re not doing enough, you’re not doing it the right way, you are doing it too late, and you’re just plain wrong. For the most part, ignore them. Don’t be thoughtless, but trust yourself. Just don’t give up. We can fight back. The Women’s March was a revelation. It gave me (and so many) hope. Let’s use that hope and stay plugged in, keep slogging through the shit. Victories will be slow, small, and thankless. But the alternative–just lying back and taking it–is unthinkable. You are not alone in this fight. We can do this for four years.

Tune in next week for a much lighter subject–book and movie reviews! I read a really great book that I want to share with everyone and I’ve gotten some requests for my long-overdue thoughts on Hairspray, Live! So be good to yourself and each other, friends, until next week.

*I totally get that many are still in the mourning stage. My personal brand of LET’S GET TO WORK Y’ALL is obviously not for everyone! And burnout is a real thing. So take care of yourself. Make sure to allot plenty of time for YOU. But when and if you are ready, and you feel able to join the fight, we will be waiting for you!