Adding hours to the day

Hope you are well! Lots going on out in the world. Be safe. Take care of yourself and your loved ones.

I must confess my heart is not in blogging right now. A close friend lost her stepdad suddenly and I am too overwhelmed with grief to be glib about television or preachy about sexism. But I owe you and update, so an update you shall have. Forgive it’s brevity and relative lackluster.

I’m still working on the book of my heart. Will not make my self-imposed Labor Day deadline, but will probably be close to it. Edits and revisions are a great way to make you feel like everything you’ve ever written is horrible and that you’re a washed up has been who never was, so that’s fun.
I’d estimate I spend 50% of my time convincing myself I’m not a terrible writer and the other 50% actually writing. Think of what I could get done if I just wrote with confidence!

Speaking of confidence, I saw a terrible lifetime movie recently (see above) about anorexia which has somehow managed to stick with me.
There is a line near the end when the teenage protagonist says “love your body, change the world.” Obvious and trite, but I’ve been saying it to myself when I look in the mirror and it’s interesting, to say the least. I’m so used to going straight to my flaws and sighing and walking away from the mirror sad. And there just aren’t enough hours in the day to feel bad about myself. I need those hours!

What could YOU do if you weren’t worrying if you were thin enough, smart enough, cool enough?

I love you all. Until next week–
Laura

Apologies for the lack of posting last week…I was pretty overwhelmed with the Ferguson situation as well as a variety of personal issues (nothing dire) and I just didn’t find the time. But I’m back! With a think piece. Sort of.

So, I have enjoyed two things recently that I’ve been told I ought not to enjoy: Megan Trainor’s new single “All About That Bass” and a jezebel.com article which featured full-frontal nude illustrations of male Disney characters. The jezebel article was speculating, in great and graphic detail, what sort of trouser-snake the heroes of Disney were hiding under their tights. And yea, I chuckled heartily at it. Because Gaston is a jerk and he would totally send tons of unwanted dickpics (NB: is a dickpic ever wanted?).

Both the comic and the song have been criticized heartily for various reasons. And the creators of both have responded with “it’s a joke”. Which leads me to wonder, if some people are laughing, but some people aren’t, is it still funny? Given that I personally have been told MANY times “lighten up, it was a joke, don’t be so serious” when I’ve called someone out on their sexism/homophobia/racism, I think it’s a topic we need to talk about.

Forgive me if you’ve already figured this out. If you have, I want to know!! If you have a blanket statement, like “if anyone’s offended, then it’s wrong” or something like that, I’d like to hear about it. What works out for you? I just don’t have a working hypothesis and that’s what’s bothering me.

So the music video…let’s start there. There’s a lot to say about it…and many people have made some excellent points about the appropriation of black culture, the fact that it pits societal approval vs. male approval (when it should really be about SELF APPROVAL), and many other things. The one constant critique is that Trainor refers to thinner gals as “skinny bitches”, then offers she’s “just playin'”. Is this passive-aggressive? Or just rhythmically convenient? Either way, calling someone a mean name and then following it with “just joking” seems unhelpful. In the South, we say “bless your heart,” which can often mean “f*&k you”, so I know about this tactic. My mom says if you’re going to say no offense…then don’t say it. I’m not sure how I feel. Could Trainor have subbed in a less offensive phrase? Perhaps. But is it okay to express genuine frustration about the women who have fat-shamed her? Maybe. Is it wrong to say skinny bitches, or is it wrong(er) to say just joking when you clearly aren’t?

Now for the dick-pics article. I found it very funny, albeit a little unnerving. Pictures of penises, cartoon or real, generally unnerve me. But the article made me chuckle, because the descriptions of each prince and his man-junk seemed fitting. I found myself thinking, yes, totally, Prince Eric would be like that! I read some aloud to Tom, who also had a laugh. Generally pretty innocuous stuff, I thought.

But then the comments. Many people pointed out that jezebel, a feminist-leaning site, rails against the objectification of women, so why do it to men? The author’s answer was, essentially, because it’s funny. And, unfortunately, I had to agree that it was. But is that okay?

I think part of the reason I was so amused WAS because it was such a dramatic role reversal from the norm. If a male-oriented site ranked Disney princesses by hotness or displayed drawings of their labia, I’d be incensed. But not too surprised. Because I’ve been catcalled on the street, objectified, and passed over because of my gender so many times that it’s hardly even surprising to me anymore. So this felt gratifying to me in a rage-fantasy sort of way, like the movie “Inglorious Basterds”. We can’t undo the Holocaust, but we can really gruesomely depict Hitler’s murder. And that feels just a little bit good. I don’t like that it feels good, but I won’t pretend it doesn’t.

So my laughter at the article, I think, was borne out of some serious frustration. And it alleviated the pain for a moment. But does that excuse it? I think not. Because by stooping to the level of my tormentors, I’m not raising awareness or creating solutions. I can already hear my critics telling me to lighten up. And I don’t want to be serious all the time! I hate the image of a feminist as a dour fun-hater who ruins all the joy in any given situation. But I wish that standing up for yourself didn’t have to be seen as an attack on fun.

A very funny man died last week. He brought laughter into so many hearts but was unable to heal his own. His death has made me think hard about humor and what it can do. It is a very powerful thing, to be sure. It can brighten a day, and it can help to heal an old hurt. It can bring understanding and peace in situations where diplomacy and logic have failed. But I’m starting to think that like any tool, humor should not be used recklessly, because someone could get hurt.

What do y’all think? And how are you celebrating the end of summer?

SOMEONE IS PAYING ME TO WRITE FICTION!!

If I seem extra-jubilant today, it’s because I SOLD THE FRANKENSTEIN STORY!!! You heard me right, folks, someone is actually paying me. To write fiction. It has happened.

I’m still walking on air. I’m embarrassed with how happy I am, despite the fact I’ve known for almost a week now. Boy, was it tough keeping this a secret for a whole week! But I wanted my blogreaders to have the first official announcement. Here’s the picture of my letter: 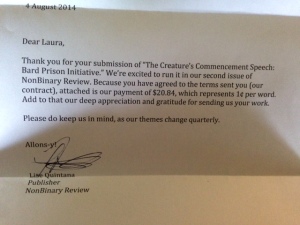 Yes, you read that right–I’m getting a penny a word. Rather Dickensian, I think, but I’m thrilled all the same. It’s someone paying me to do what I love…I never thought I’d actually get this far. I am deeply, deeply grateful for this opportunity.

So the piece is called “Creature’s Commencement Speech: Bard Prison Initiative”. It is written from the POV of Dr. Frankenstein’s monster (or George, as I call him). He’s been asked to give a commencement speech to the graduating class at Bard’s prison college program and he’s a little stumped as to why he was given this honor. He’d like to take the opportunity, however, to set the record straight about a few things…

You guys, I am so proud of this story! I am OBSESSED with Mary Shelley, so naturally Frankenstein is a favorite. (Seriously, go check her out. She was an amazing woman with a life stranger than her fiction.) I wanted so badly to do her justice with this work. I slaved over it for days and days and days and days. Usually I write in a big burst, proofread once, and then it’s done. I’m not a dally-er. But with this one, I was fastidious. Like, should I use “get that straight” or “straighten that out” here? I obsessed over word choice. I obsessed over paragraph breaks. I obsessed over deletions and insertions (and un-deletions and re-insertions). If you think there’s a metaphor to be made here about becoming like Dr. Frankenstein to write a story about Dr. Frankenstein, then you are absolutely right. 🙂

When it was done, I felt like I had truly given everything I had to it. There are so few things in life where I can say I gave it EVERYTHING. Perhaps the Obama campaign in 2012 was one for me. But usually, you can phone it in, get by with just enough, etc. This, though, was truly the best that I had to offer. So I submitted it, and prayed. Hard. I felt like if this didn’t get published, then I should pack it in as a writer. I should go back to being a full-time lawyer instead of a part-time one, stop daydreaming, and just acknowledge that it’s really hard to be a writer and I probably won’t make it as one. I said all this to myself as I laid awake in bed, tossing and turning long after my partner had slipped into sleep.

Then I got the email. They wanted it!!! And I just feel like it’s a sign. I know that’s hokey, but it’s true. I feel like yes, it IS hard to be a writer. But I can do it. Will I ever become JK Rowling famous? Probably not. But that doesn’t matter. I can write books, good ones. And they will touch and inspire teens as I was touched and inspired when I was a teenager. And that will be enough.

So I am taking a deep breath and revising the Book of My Heart, aka the book I’ve been working on for three years and about 7 drafts. I’ve stepped away from it several times because I love it so much and I want it to be perfect so much that it feels too high stakes. I’ve been avoiding it to write things I care less about and am less invested in. But enough of that. It’s time. I’m ready.

So…draft FINISHED by Labor Day (I have a calendar with daily page goals and everything) and querying agents by Christmas. That is my plan. Hold me to it!!

What has made your heart go pitter patter this week, dear readers? What are you celebrating? Let me know!!!